Defensive Potting: The story of Michael Simon’s evolution out of the round

So I just got back From the Michael Simon gallery talk at the exhibition of his work, “Pick of the Kiln’, at the Georgia Museum at UGA in Athens. I’m so happy I went! I’ve known Michael since he was my teacher back in the mid 90’s after Ron Meyers retired from UGA. There are many things I’d like to ask Michael and get his insight on, but I came to this talk with one question in mind.

The thing I was curious about was the evolution of his pots to include forms that are out of round. 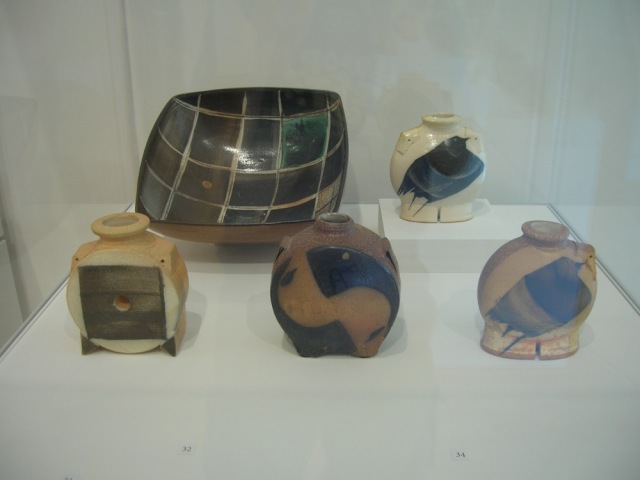 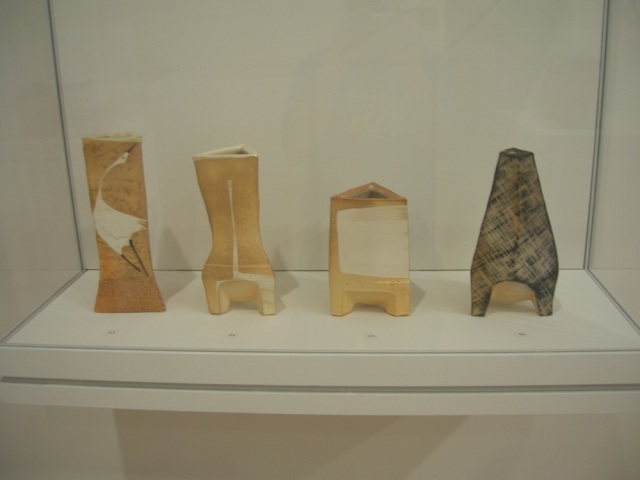 He makes ovaled, squared, and triangular pots starting from the round form that is natural to the potters wheel. But why? Was his evolution something like mine, and that the example of other potters was his inspiration? For me, I can honestly say that having learned pot making in the presence of these out of round shapes has guided how I think about the possibility of form. From Michael’s angular departures from the round to Ron Meyers’ more fluid and gestural out of round treatments I had examples of things to aspire to beyond round symmetry and uninterrupted circularity. Is that what motivated Michael? 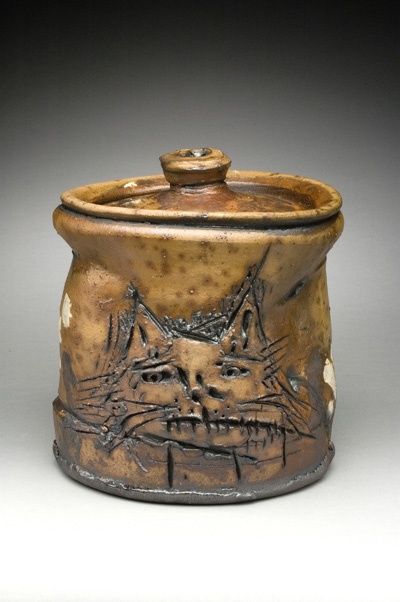 Ron Meyers shows how not to be too round, in a casual and organic way. Someone once told him his pots look like “wet socks”. He kind of likes that…..

Another possibility I could have understood was that the diversion from round was appealing in its own right. There are things we each like and dislike, and after seeing pots that are not round I can also honestly say that the squareness and triangularity of some of his forms is both fascinating and appealing. I even love that they are not round! Round is almost too simple, too easy. What you get off the wheel if you’ve done a good job is almost always round. Its the hard thing for beginners but almost impossible to not do once you get the hang of making pots. You have to try to get it different. Purposely. You have to break the rules.

Ron does this by casual manipulation of the form, by squeezing the pot while it is still wet, and by handling the shapes without regard for their uniformity. Michael is much more methodical, less immediate. There is a plan. As he explained later in the discussion, you start at one side and make a corner, look to the opposite side and make a corner there, and then in between those on both sides. And if it doesn’t come out even or symmetrical? “Who cares! Its still a pot.”

So I was also prepared for Michael to answer that he simply liked pots that were unround, that squareness held charm for him. That was something I could have understood.

Instead, what he answered was that he just didn’t think some of his round forms were very good.Making them square or triangular was a defensive act. Some pots simply don’t stand well on their own. And putting patterns and motifs on the pots didn’t seem to always make sense on round surfaces. His solution was to make the surface more flat, so that the pots had natural edges to contain the motif.

I later asked him about something he had said in that interview with Mark Shapiro for the Smithsonian. He had said that people often have a hard time seeing forms, and that its much easier for folks to look at something with an image on it. He had also said in that interview that some pots seem to need a bit of something extra, a bit of 2d patterning on the surface, while other pots can stand on their own.

We looked at these pots in the display, 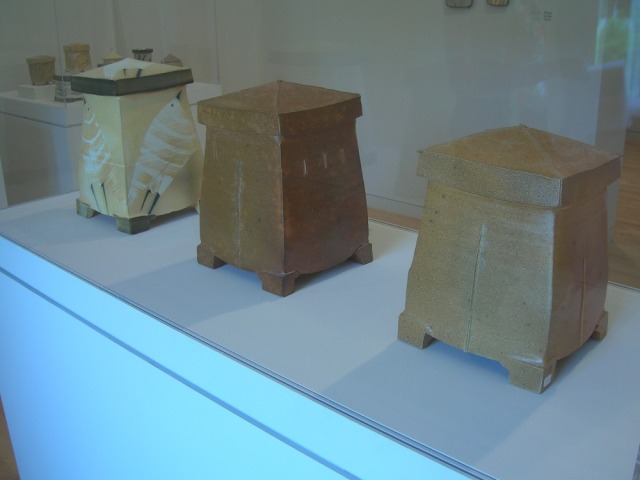 and he said that of those three almost everyone would automatically look at the one on the far left. He also said that he had designed the other two to be undecorated, knowing full well that they would not draw as much attention as the one with the bird…….

Its a profound lesson in humility that a potter like Michael Simon considers some of what he does ‘defensive potting’…… Michael’s forms have almost always blown my mind. Another thing he said was that he never felt his pots were good enough, that he always hoped he was getting better. Maybe the only way to keep challenging yourself creatively, the only way to force yourself to break and rebreak all the rules, is to never be satisfied. Maybe you have to look at your work as a defensive act that addresses your own inadequacies. That seems like an important lesson in a creative culture that feeds on the celebrity of chest pounders and self aggrandizing publicity artists….. Michael remains a humble and gentle soul despite how fantastic the rest of us think his pots are.

Something to think about, at least…..

I am an active potter and sometime pottery instructor who is fascinated by the philosophical side of making pots, teaching these skills, and issues of the artistic life in general. I seem to have a lot to say on this blog, but I don't insist that I'm right. I'm always trying to figure stuff out, and part of that involves admitting that I am almost always wrong in important ways. If you are up for it, please help me out by steering my thoughts in new and interesting directions. I always appreciate the challenge of learning what other people think.
View all posts by Carter Gillies →
This entry was posted in Art, Beauty, Ceramics, Clay, Creative industry, Creativity, Pottery, Teaching. Bookmark the permalink.