I had a revelation the other day. I was thinking about two of the pots I had just purchased from the recent Crafted and Designed exhibition and I realized that neither Liz Lurie nor Simon Levin had signed/stamped their pots. 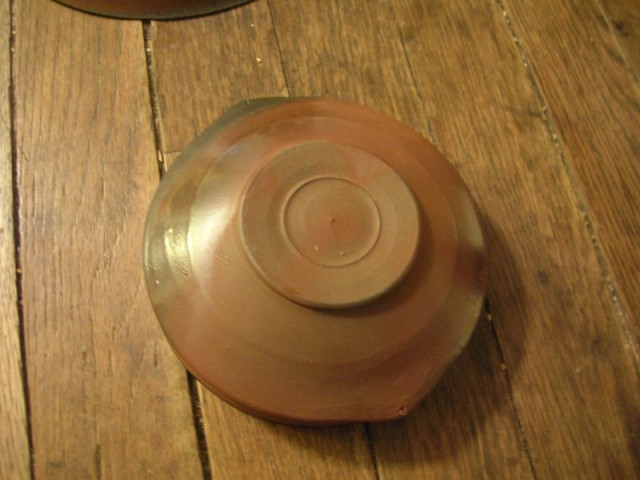 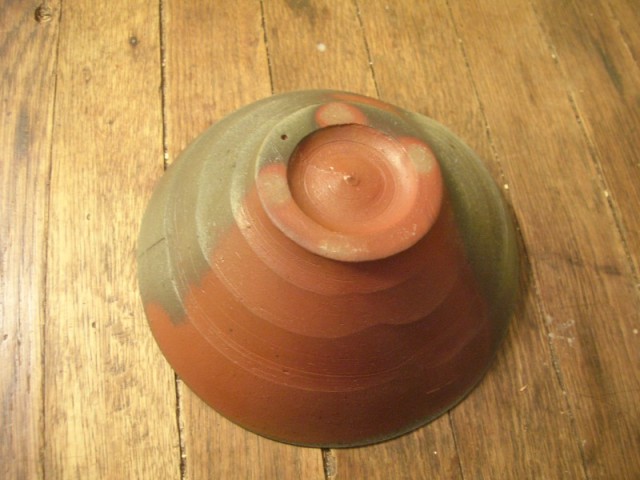 (The brilliant flash of light slowly dims, and the bewildered author stagers blindly for a few moments more until finally things return to focus and he can see the world anew.)

So many artists sign their work, I assume for a variety of reasons. I was told back in my school days that I “needed to sign my work”, and so I compromised by coming up with a meaningless stamp, half decoration half faux signature. And I’ve been putting one form or another of that blasted impression on virtually all my pots since. I at one point figured out that a good way to keep track of my various clay bodies would be to use different stamps to pick them out. Most of my work these days is in ungrogged white clay, and its nigh impossible to tell the porcelains from the other white stonewares when I’m about to do my glazing (Mostly Highwater Clay’s P10 porcelain and Loafers Glory). Another series of mugs I stamped upside down to remember the day one of my studio cats showed up injured. I was heart broken, and in my distress and still needing to finish the work I had started the day before I decided that my regular stamp was simply not right for the situation…..

Originally I think I was using the stamp to indicate where I wanted folks to look. The pots all have sides, and the front needed to be distinguished from the back. (This was a lesson I learned from Linda Christianson during the semester she taught at UGA. She pointed out that a handle on a mug will look better in one spot than another if the pot is not uniformly symmetrical. You have to look for the best option, and that decides the front from the back. I tend to avoid symmetry, so this insight made perfect sense to me.) Sometimes I put the stamp right in the solar plexus. Other times I put the stamp somewhere under the chin. On mugs I usually put it on the shoe laces just above the feet. At some other point I decided that some pots can have two ‘fronts’, and I robbed them of a ‘backside’. At other points I decided mugs could be stamped just next to the arm pit, or even on the tush where the lower extremity of the handle rested. At one point I was so disappointed in the clay body I was using that I hid my smallest stamp underneath the pot, where you could only find it if you properly undressed it in use.

Back in the day when I was a late twenty-something, just starting Philosophy grad school, I somehow got the idea that some personal image control was necessary. I grew my hair out into a stringy snarled mess that eventually reached below my shoulder blades. I also kept up my fascination with tie dye T-shirts that I had fallen in love with living out in Seattle in the late 80’s. This was my uniform, grungy Chuck Taylors included. This was how I presented myself to the world in the early 90’s. Its amazing I ever got a date!

Tune in a few years later and its still the same image, just older and now in Pottery grad school rather than Philosophy. While working the day job that helped pay my bills a coworker (who incidentally had also been one of my undergrad Philosophy students) declared that “You can become a stereotype of yourself”. He was talking about changes in his own life, but the message hit home in my world as well. It took some time to work up the courage, but eventually I cut my hair completely off (I still have it almost 20 years later as part of an impromptu sculptural installation), ditched the now threadbare tie dyes, and opted for foot wear with more arch support.

Its simply amazing what we do to ourselves with the momentum of our history. You can settle into the most uncomfortable situations by making one questionable decision and sticking with it, come hell or high water….. Its just incredible what we do to ourselves because we have defaulted into this one image we are trying to project….. Not even actively trying, at times. Its just there. Like acne, halitosis, and dirty fingernails….

So, just the other day I had the second shoe drop, and the further lesson of that original revelation hit me that my stamp had become like my hair back in the early 90’s. I didn’t have to wear it if I didn’t want to. Despite my instructor once telling me I had to have something to represent ‘me’, there really was no other compelling reason why that simply had to be the case. The decision was staring me right in the face: I could ‘cut my hair’ a second time, and dump the gimmick out the door. Rather than simply stamping my pots as default, or somehow compulsory, I recently let whole swaths of pots dry without stamping them. I realized I always hated how my flared bowls looked when I stamped them, and it was a genuine relief not to punch out the sides of the ones I just made with the heavy handed use of my branding iron…. Other forms were equally unimpressed with the difference the absence of a stamp made: They looked just fine without them. Maybe I can do this after all….. Maybe its also up to the audience to decide which part of the pot is its ‘front’?

That said, I stamped all the mugs I made next. Maybe I will only pull it out on special occasions. Maybe only the pots I consider my own best expressions will be touched by the heated iron. Hypocrisy? Maybe. But I have to respect that sometimes it feels right and others it does not. That feels honest to me.

So, my lovely art making friends out there, are you ‘wearing you hair long’ because you feel you don’t have another choice? Or simply ‘cutting it short’ from habit? Will you change it up as the mood strikes you? Or have you simply done the same style over and over for so long now that you can’t really acknowledge there are other ways of doing it? What’s to stop you from cutting your hair? That some collector won’t buy it unless its been ‘authenticated’? I’ve had customers ask me where it is signed. Should we provide them with notarized certificates of authenticity as well? Maybe standing there with a magic marker and putting our ‘X’ across the face of it would appease them? They seem to suggest that they are occasionally paying for the signature more than the pot itself….. Is that what we are hoping for? Do we owe it to them?

Starting to ramble! (Pulls self back from the brink of temptation)

What do you all think?

I am an active potter and sometime pottery instructor who is fascinated by the philosophical side of making pots, teaching these skills, and issues of the artistic life in general. I seem to have a lot to say on this blog, but I don't insist that I'm right. I'm always trying to figure stuff out, and part of that involves admitting that I am almost always wrong in important ways. If you are up for it, please help me out by steering my thoughts in new and interesting directions. I always appreciate the challenge of learning what other people think.
View all posts by Carter Gillies →
This entry was posted in Art, Arts advocacy, Arts education, Ceramics, Creative industry, Creativity, Pottery. Bookmark the permalink.

13 Responses to Almost cut my hair……