“Between 1926 and 1938 René Magritte (Belgian, 1898–1967) developed key strategies and techniques to defamiliarize the familiar—to make, in his words, “everyday objects shriek aloud.” During this period of intense innovation he was closely aligned with the Surrealist movement, and his work of these years constituted an important new approach to Surrealist art.

Like the other artists and poets associated with the Surrealist movement, Magritte sought to overthrow what he saw as the oppressive rationalism of bourgeois society. His art during these essential years is at times violent, frequently disturbing, and filled with discontinuities. He consistently interrogated conventions of language and visual representation, using methods that included the misnaming of objects, doubling and repetition, mirroring and concealment, and the depiction of visions seen in half-waking states—all of them devices that cast doubt on the nature of appearances, both in the paintings and in reality itself. The persistent tension Magritte maintained during these years between nature and artifice, truth and fiction, reality and surreality is one of the profound achievements of his art.” MOMA exhibit details

Well, I wanted to make a butter dish… at least when I started out……. How quaintly bourgeois of me! 😉

Unfortunately, there are about 5 pounds of clay involved, and the tiny interior ‘well’ in which one might think to put butter is so small in relation to the overall size of the dish that hauling it in and out of the refrigerator would be more trouble than its probably worth…. Just to get a smidgen of butter, that is. Not to mention that the area inside the fridge taken up by the dish for one measly stick of butter is so massive compared to the ordinary need for butter (at least in my house) that it only reminds me of the absurd extravagance required to cushion the petite derrière of the princess who lay on 20 mattresses and 20 feather beds to avoid the bump of a solitary pea. I suppose 20 mattresses and 20 featherbeds stacked somewhere short of the ceiling looks like it might be a bed….. Treachery of images, indeed! 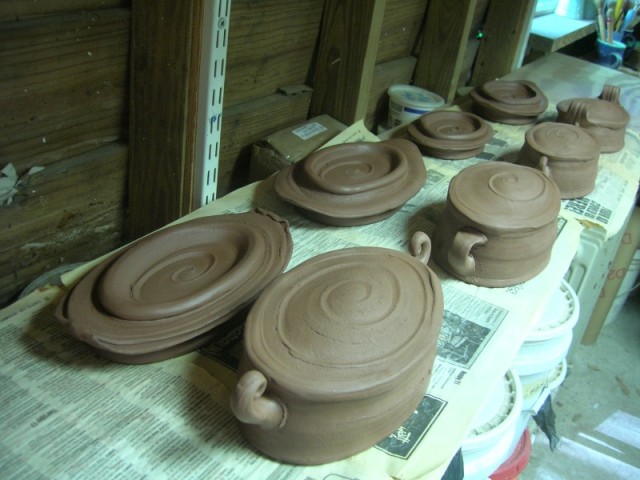 Can anyone say “Overkill”? 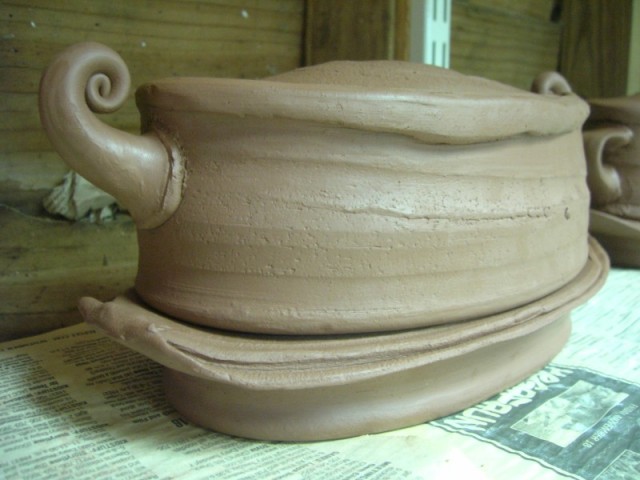 Beware the treachery of images: “This is not a butter dish!”

So I made ’em, and what the hell if they don’t have a use. Not everything we do needs to have a purpose. We don’t need to be justified in doing anything that we set our hands to. That’s not the way it works. Or, it works that way sometimes but not always and therefore not necessarily. Sometimes the reason we thought we had for doing something turns out to be so absurd when we reflect on it that we can almost if not clearly see that ‘reasons’ are occasionally the excuses we tell ourselves to make it appear we are heading in the right direction. But that’s just the way it appears, if we are lucky. The problem with directions is that they often lead to places we didn’t anticipate. The problem with appearances is that they tangle so easily. We tend to want them both in proportion to the oppressions of rationalism that we suffer. To which I can only say, “Stuff that in your pipe and smoke it!” 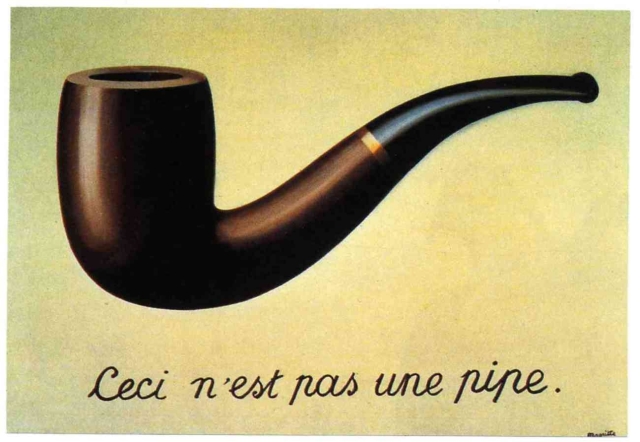 Oh, the treachery of images!

I am an active potter and sometime pottery instructor who is fascinated by the philosophical side of making pots, teaching these skills, and issues of the artistic life in general. I seem to have a lot to say on this blog, but I don't insist that I'm right. I'm always trying to figure stuff out, and part of that involves admitting that I am almost always wrong in important ways. If you are up for it, please help me out by steering my thoughts in new and interesting directions. I always appreciate the challenge of learning what other people think.
View all posts by Carter Gillies →
This entry was posted in Art, Ceramics, Clay, Creativity, Imagination, metacognition, Pottery. Bookmark the permalink.

7 Responses to After Magritte