The Mathematics of Altered Pottery Forms

“Mathematics is the abstract study of topics such as quantity (numbers), structure, space, and change.” Wikipedia

One of my favorite things to do is to take a pristine pot off the wheel and change it. Some would say “damage it”, since the perfection of a round symmetrically thrown pottery form has altered to some other structure, not always round and not always symmetrical. Round is what potters’ wheels do, and the better you are at controlling the clay the easier it is to manipulate the shapes into consistent and even distribution. The still point at the center radiates a formal symmetry. You almost have to try to upset the harmony. There is a simple perfection in a circle that is natural to wheel throw pottery, and a uniformly round form has a basic access to that ideal.

But for me that’s too easy, to let perfection sit idly at the wheel. Of course I can make it round and of course I can throw it to a consistent shape. But what’s the fun in that? Taking the easy way out? Or relying on simplicity? If our pots are an equation of process and proportion, what exactly is the formula we are using? We take a lump of clay and give it volume, move it out in space, give it structure, make it one of many that have come off the wheel in a seemingly endless progression from lump to form……

Finding harmony with the still point at the center of the wheel is easy after a bit of experience. Its something that makes sense to aim for. But we can also strive for this uniformity not merely as the endpoint but as just a middle step in the process. We can stop with simple uniformity or we can push things further. Personally, I like pots that are different in sometimes subtle or nuanced ways, sometimes exaggerated and striking permutations. I like pots that are oblong, that are square, that are triangular, that are loosely round, that have sides, a front and back, that are dented and ‘deformed’, that have movement and dynamic tension…… So, you can see that altering pottery forms is at heart a Mathematical proposition: “Quantity, structure, space, and change”

But what are the operations that can be applied to a pot to make it different? Two of the most basic are making it bigger and making it smaller: Addition and multiplication, and subtraction and division. Here’s what these various mathematical operations look like applied to clay:

1.  Addition    Pots can get larger with the addition of other components or parts, i.e., putting two or more forms together to make a single new one. This can include adding a lid to make a jar, adding handles, adding spouts, lugs, sprigs, feet, and any number of other possible combinations. Addition is essentially a matter of combination. 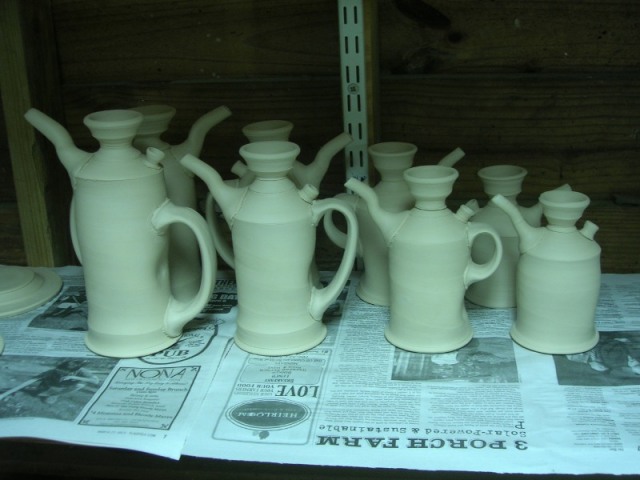 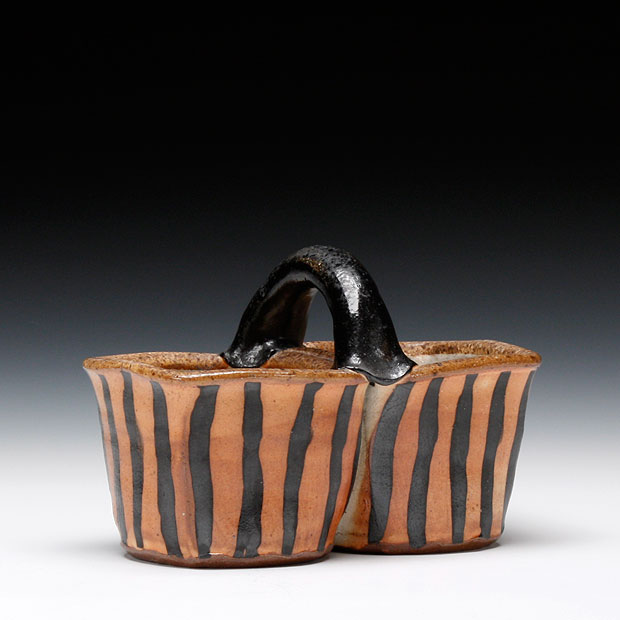 That’s a lot of slipping and scoring- base, lid and ‘knob’ all added to the thrown ring.

2.  Multiplication    Pots can change by multiplying their dimensions. In other words, a basic form can become larger by being stretched to some new size and proportion. This can be done by throwing the pot out on a surface (usually a low form) that pulls the edges out in that direction, or coaxing the clay further, as in pulling a spout or bellying or poking the form. Aggressively ribbing the pot in a nonuniform unevenly distributed way can also stretch the form out of round. Squeezing and paddling alters a form multiplicatively by reducing or changing its size in some way, making it smaller by a fraction or degree or bending it into a different distribution of shape. Decoratively stamping forms can also be seen as a function of multiplication in this way.

These were squeezed at the bottom of the wall while still on the wheel. Sometimes I make these and then throw them out on a table to stretch them further. 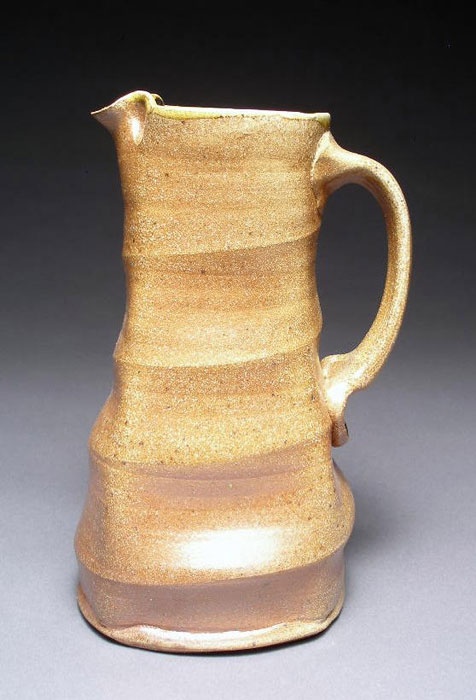 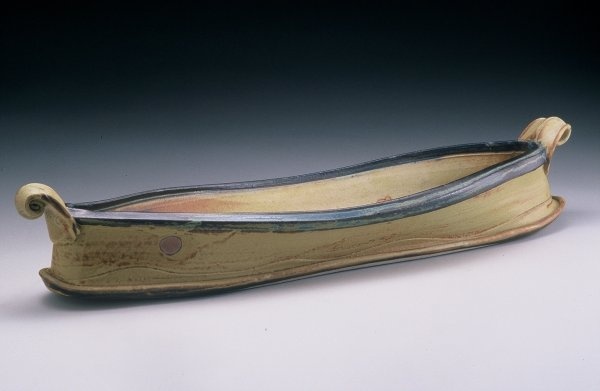 3.  Subtraction    Pots can become smaller by subtracting clay from them. This can be done by faceting, fluting, trimming, incising, darting, gouging, or otherwise altering the pots to have less clay and less extension in space. By taking clay away we are left with something smaller. But smaller can be better too. Some pots benefit from having clay removed from them in artful ways: 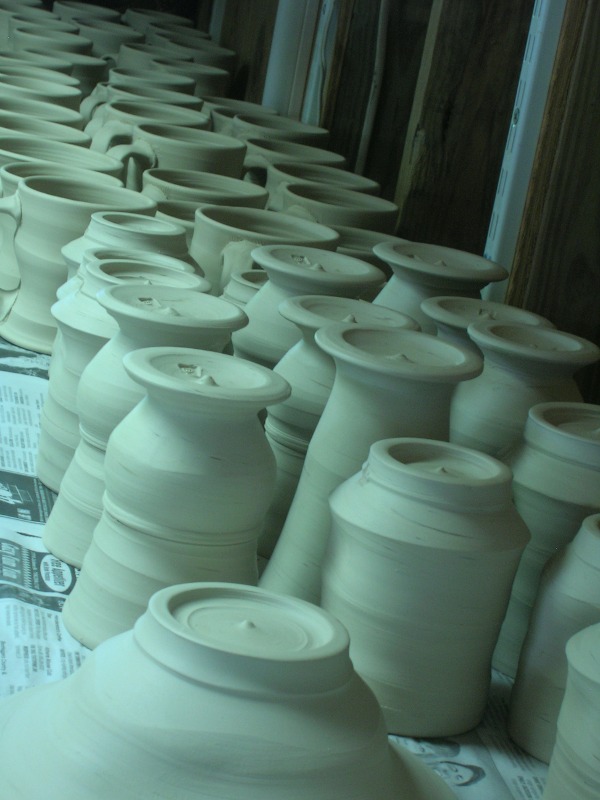 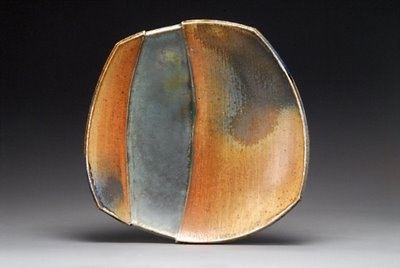 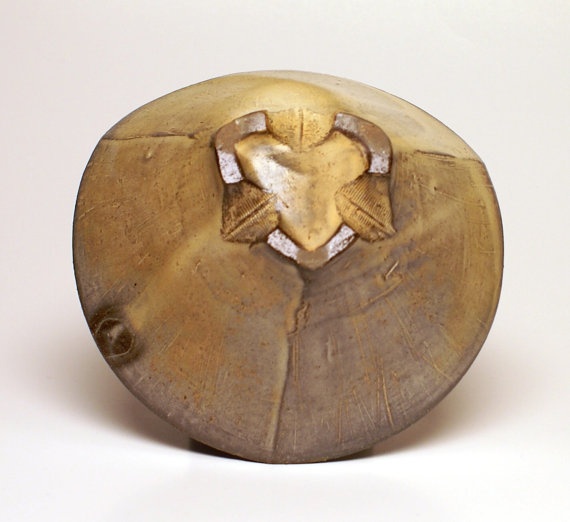 4.   Division    Pots can change by division as well. Sometimes cutting away parts can leave two or more from an original one. This may not be the most useful operation a potter can perform to make single vessel forms, but can be profitably used to construct parts. In other words, division is rarely the only mathematical operation done to a pot. These divided segments will often become ingredients of something larger, a function of subsequent addition. For instance, a divided cylinder or flared shape can be used to make a spout. Or basic forms can be split into several constituent parts and added back together to make something else. (Division can sometimes seem like subtraction, but that’s simply because 10÷2 is the same as 10-5. Dividing by two and taking half off are related exercises. Division, in a sense, is always a matter of subtraction….) 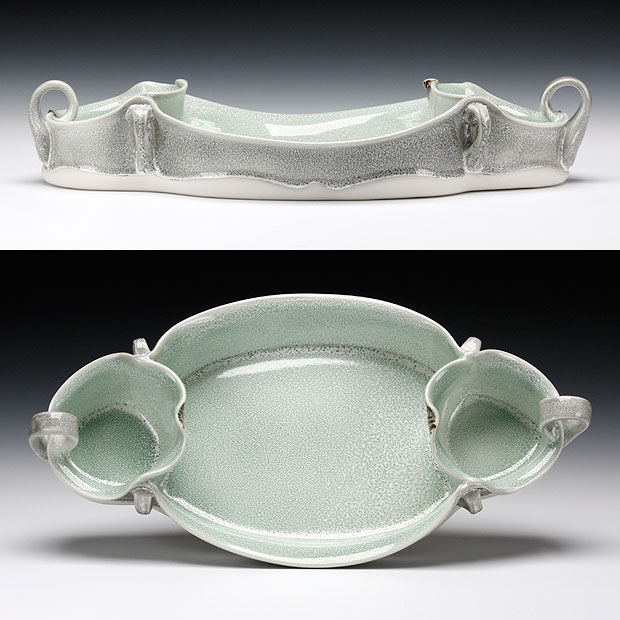 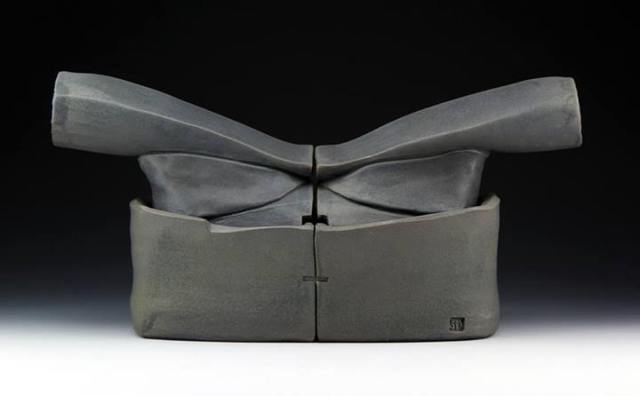 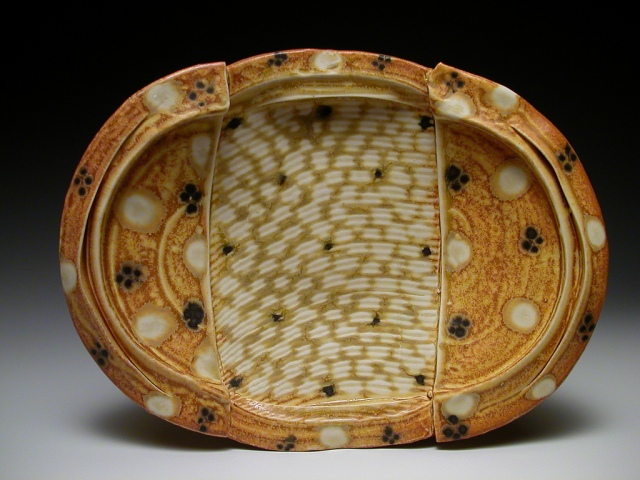 So you can see how many things that potters do are naturally related to Mathematics. We may be better, most often, at simple addition and subtraction, but some potters’ forms are often equations of exquisite complexity and elaborate composition. We are, in fact, natural Mathematicians. Who would have thought!

I am an active potter and sometime pottery instructor who is fascinated by the philosophical side of making pots, teaching these skills, and issues of the artistic life in general. I seem to have a lot to say on this blog, but I don't insist that I'm right. I'm always trying to figure stuff out, and part of that involves admitting that I am almost always wrong in important ways. If you are up for it, please help me out by steering my thoughts in new and interesting directions. I always appreciate the challenge of learning what other people think.
View all posts by Carter Gillies →
This entry was posted in Art, Ceramics, Clay, Creativity, Imagination, metacognition, Pottery, Teaching. Bookmark the permalink.

4 Responses to The Mathematics of Altered Pottery Forms