(Over a million views for this video, so I must be wrong to despise the song so much….)

Well, Both Michael Kline and Ron Philbeck have announced their ambition to follow in Michael Simon’s footsteps and make just a handful (12-16) pots a day, and not more. It seems like a fascinating approach, so I thought it worth thinking about. This is the way Ron phrased it:

“For me, right now working with a small kiln and doing a great deal of decorating, I feel the need to go slow and steady.  I don’t really think ‘slow’ is the right word but what I mean is that I do not feel like I want to be cranking out pots and trying to play catch up, keeping them under plastic as I struggle for days to finish them.”

So of course I thought of the lyrics of that song, and how much this slowhanded approach is more about the unhurried lover’s caress than the mechanical rush to complete something. Its more about the journey and the intimate things that reveal themselves than just the dash to the finish (dare I say “climax”?). Here are the lyrics:

“You want a man with a slow hand, you want a lover with an easy touch
You want somebody who will spend some time
Not come and go in a heated rush
Baby, believe me, I understand, when it comes to love
You want a slow hand”

If you want to see just how slow a hand Michael brought to the clay, watch this video of a workshop he and Ron Meyers did back in 2002:

Back when I was a mere pottery baby, not yet the love-child of Ron Meyers and Michael Simon that I would eventually later become, an instructor told me that I should only make one of each pot. He argued that this way the pots would stay fresh (and also that this was the way Michael Simon did it). It was one of those pottery instruction pronouncements that you hear so often: “Thou shalt such and such”. In a sense I could see that not repeating anything would by definition lead to something fresh. But I wasn’t sure if it lead to something ‘fresh’ in a good sense, or merely ‘fresh’ as in new. It seemed more like a sculptor’s prejudice against the ubiquity of pottery multiples.

And in the end I saw it for what it was: The preference of one person for the way they themselves prefer to do things. There are plenty of valid pottery reasons to pursue multiples, work on consistency, and work through variations on themes. ‘Freshness’ itself can be achieved the slow organic way as well as by pouncing on something different each time. (Sometimes I think instructors deliberately say misleading or false things so that you are forced to come up with the truth on your own. This may have been an example of that.)

But you couldn’t argue against the truth that sometimes repetition breeds a certain staleness. Its not that it inevitably does, but as a human tendency familiarity does seem to occasionally breed contempt. Call it our tendency to take familiar things for granted.

Several semesters later I actually had the great fortune to be in the right place at the right time and amazingly had a class with Michael Simon himself (as they were searching for Ron’s replacement). If only I had been a better student back then! I still didn’t understand that clay would become the major focus of my life. So much of what he showed us went in one ear and right out the other.

But I still learned a few things. And when I wasn’t lost in my own world I actually did pay occasional attention to what The Master had to say. One of those little quips that came out in class was that you should “make each pot individually”. That almost sounded like the advice I had gotten several semesters before. “Individual” and “only one” mean almost the same things. One of my fellow students took it this way and proceeded follow these instructions with his typical rigour. He took it to mean that every piece of clay had to result in a pot that was purposely different from every other pot. In other words, that you had to make each pot different, no two the same.

The task itself was daunting, but coupled with an obsessive compulsive personality it almost drove my friend bonkers. So the nugget of wisdom that Michael so casually threw out, simply had to mean something different. What I eventually came to understand was that it was important to treat each pot on its own terms. Instead of focussing on the pots that had come before, or trying to stuff the clay into the garments of some other pot, what was needed was an attention to that particular lump of clay itself. How can this piece of clay become the best that it can be? Not by emulating some other pot, but by staying true to what’s best within this lump of clay itself. Not one ideal set of proportions or details that serve for all pots, but the proportions and details that make this pot its own best expression.

Much later (in grad school) another instructor told me that every mark Ron Meyers left was “deliberate”, and I thought, “Well, that’s not true! It could have been different and Ron would have accepted it. Why else does Ron do things so casually?” But maybe I was interpreting ‘deliberate’ the wrong way. It doesn’t just mean putting everything where it belongs. It also means paying attention and ‘deliberating’, or deciding. Ron’s openness to exploring meant that being deliberate was an extension of the kinds of marks, not the exact distribution of them. In other words, a loose plan.

But Ron, like Michael (and every other decent artist), is at heart a lover. And while its possible to make interesting and good pots without being a lover of the clay, why wouldn’t we want to be? Are we sometimes guilty of just taking from the clay, imposing ourselves on its pliant form? By looking at some ideal pottery shape in the distance of our imagination or sketch book are we sometimes failing to appreciate the raw potential that this one piece of clay has that is different from all others? We don’t love this lump of clay by wanting it to be just like all the others. We don’t love it by wanting it to be something different. When we are true lovers do we not also sometimes try to give something back, to listen to the soft words of our beloved, to accept what it is, and to help it become something that only this relationship can give it? Something that only this slow hand will understand? 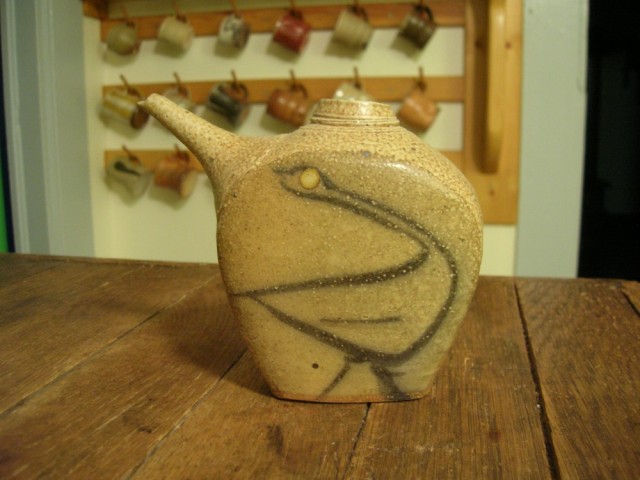 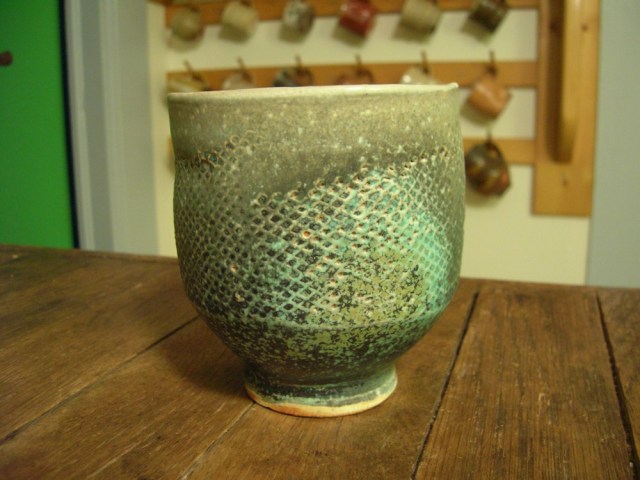 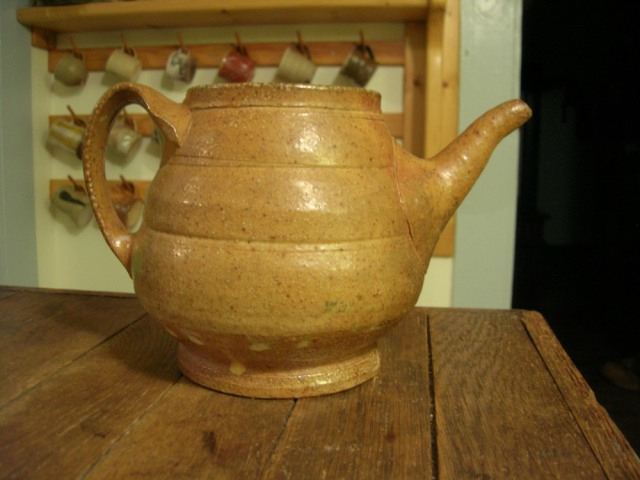 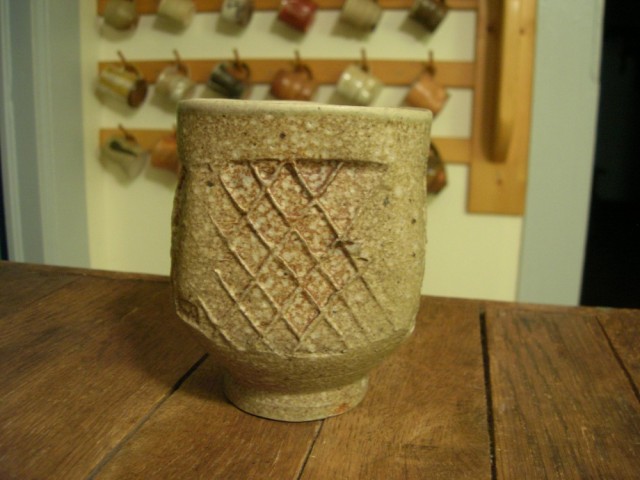 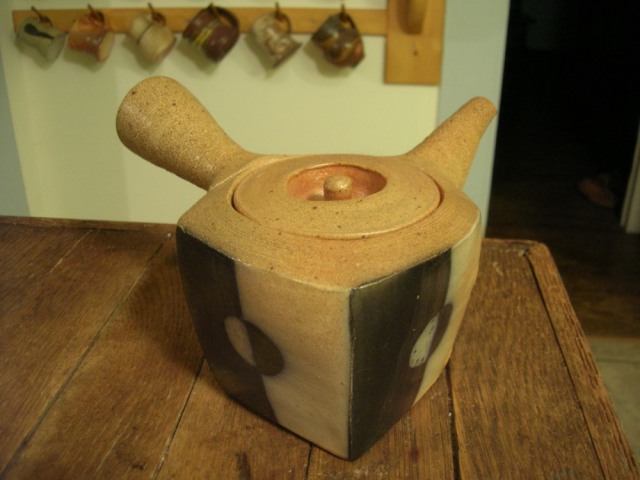 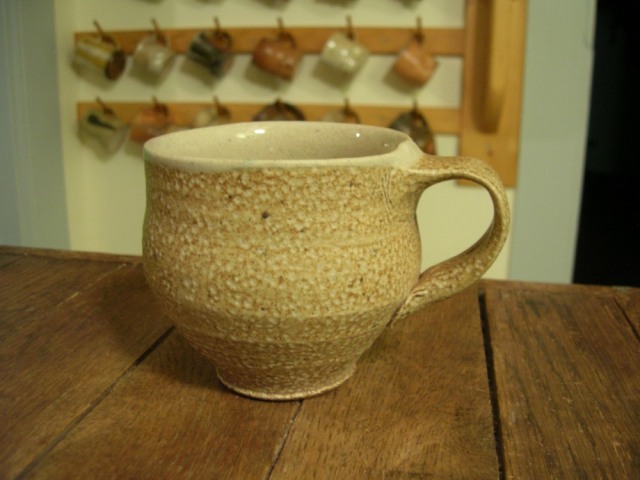 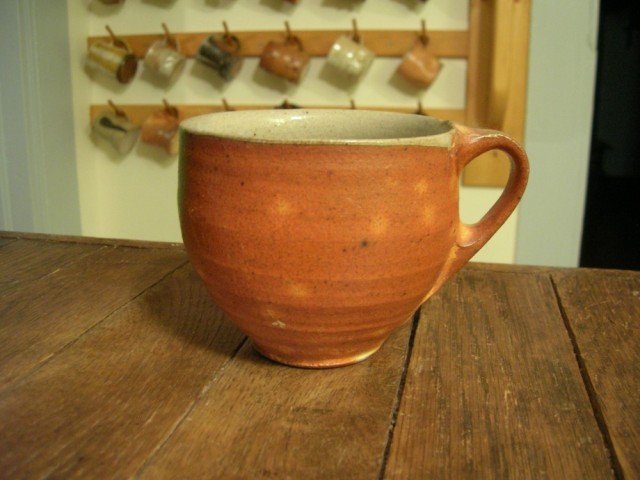 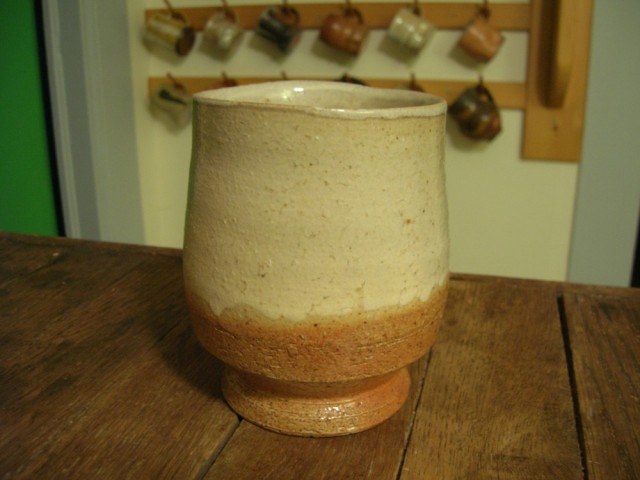 I am an active potter and sometime pottery instructor who is fascinated by the philosophical side of making pots, teaching these skills, and issues of the artistic life in general. I seem to have a lot to say on this blog, but I don't insist that I'm right. I'm always trying to figure stuff out, and part of that involves admitting that I am almost always wrong in important ways. If you are up for it, please help me out by steering my thoughts in new and interesting directions. I always appreciate the challenge of learning what other people think.
View all posts by Carter Gillies →
This entry was posted in Uncategorized. Bookmark the permalink.

11 Responses to “Slow Hand: The Story of Michael Simon Pottery” (unofficial, of course)